Draw the structures of organic compounds A and B. Indicate stereochemistry where applicable.

Draw the structures of organic compounds A and B. Indicate stereochemistry where applicable. 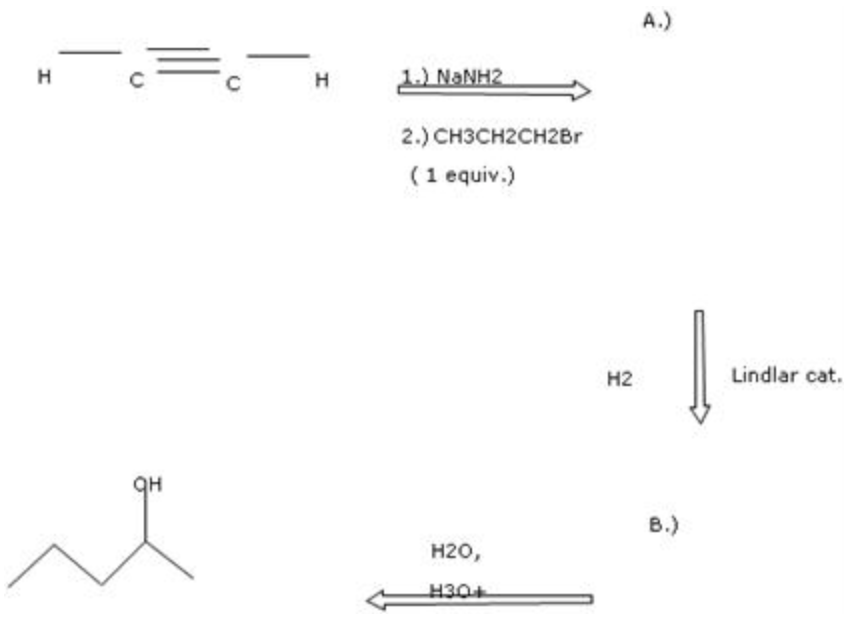 This problem is based on the concept of alkynes. Alkynes are the class of organic compounds containing carbon-carbon triple bonds. Alkyne is converted into higher alkyne on reaction with haloalkane in the presence of a base. The reduction of alkyne to alkene can be made in the presence of Lindlar's catalyst.

(1) Ethyne, which is a terminal alkyne, reacts with sodamide to give acetylides, which in reaction with haloalkane produce higher alkyne, which is pent-1-yne.

The reaction of acetylene with propyl bromide in the presence of sodamide is written as follows:

Part 1 The structure of organic compound \(A\) is as follows:

The hydrogenation of alkynes can be easily carried out using deactivated catalysts such as Lindlar's catalyst to produce cis alkene. The Lindlar's catalyst is \(\mathrm{Pd} / \mathrm{CaCO}_{3}\) in lead acetate poisoned with a small amount of quinoline. The acid-catalyzed reaction of water with alkenes results in the formation of alcohol. The alcohol formed here is 2 pentanol. The addition of water molecule takes place according to Markonikov's rule, which states that highly substituted alkenes are predominantly formed.

The reaction of pent-1-yne with Lindlar's catalyst is as follows:

The alkene formed from the above reaction gives alcohol on hydrolysis as follows:

Part 2 The structure of organic compound \(B\) is as follows: